When one is trekking through the adventure of dungeon creation, one often looses sight of the goal. Playability and concept.

This weekend, I made just such as mistake by saying, "wouldn't it be cool to add in a dwarven fortress?" Yes, yes, it would. But does it really work when part of my original concept was to get rid of the standard D&D humanoid monsters? No, not really. Not only that, half of the fortress I had created was pure catacombs. And a hell of a lot of them. Cell after cell of dead, skeletal dwarves. When keying rooms, the total came up to 387 on a single sheet of paper. I hope you can appreciate my problem.

Well, last night, I went back to the drawing board. Literally. I got out my white board and started drawing cross sections. I decided to keep my wizard's lair, the Vats of Mazarin, for the first two levels (which I have also almost completely redone).

Before I get too far into explaining it, here's a rough estimation of what I came up with: 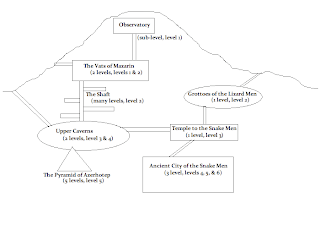 That should give you a rough idea of what the first 5/6 levels are going to look like.

The Vats of Mazarin (completed) - The lair of Mazarin, a long deceased magic-user. Level is generally inhabited by berserkers, vermin, oozes, mole men, and adventurers scavenging for loot.

The Observatory (currently working on) - More or less untouched, some serious hints as to what Mazarin was up to. Less monsters, more treasure than the Vats proper. A good find what anyone who figures out how to break inside.

The Shaft - Based on my previous megadungon, the shaft has many branching fun-house style sub-levels. Possibly the most varied section of the dungeon and a few hints (but not man) to its history. Many different types of monsters, adventurer, a rival group of berserkers, a section filled completely with plants, etc. Should be fun, but easy to pass by for those who would like to get at more of the meet of the megadungeon. Fun for games when not everyone can make it.


The Grottoes of the Lizard Men - Believing themselves to be the last surviving ancestors of the Snake Men, this tribe of lizard men have moved into these caves and besieged the Temple of the Snake Men in attempts to take for their own. Lead by a lizard-man Binder (5th level sorcerer).

Temple to the Snake Men - Built in centuries past, it has since then been home to a small tribe of unorganized and ignorant cultists. They are, however, not at war with the lizard men in the cavern above. Not only that, but a group of chaotic sorcerers on the surface has gotten wind of a Temple devoted to the extinct Snake Men in the region, which like contains many artifacts related to the lost art of sorcery. This group may well become the major villains in the campaign.

Upper Caves - Big, sprawling caves filled with barsoomian white apes and other monstrosities. Few adventurers except as random encounters. A portal to Barsoom here. Other than that I haven't given it too much though.

The Pyramid of Azerhotep - Magic-user of great power seeking immortality constructed this underground pyramid to protect his body which he put into a stasis. May be awakened by the PCs. Within this section, there are clues to an space station orbiting the planet, but no clear way to get there. Oh yeah, and a guy from L.A. or some other big modern day city. He's going to be here too.

Ancient City of the Snake Men - Came to the planet in search of knowledge concerning the Old Ones. I'm not sure exactly what's going to be here yet, but it's going to be awesome.

Beyond this are the lower caves, an enormous robotic fortress, the hall of portals, and other oddities for the characters to explore.