I ran two games of Agrivaina last night. No one has given me a write up and there are some details I believe Skull Lord Uggs would like to keep under wraps for the moment. Basically, there's what happened, though.


In the aftermath, Lord Uggs and Alexander of Wessex have declared war on each other over who is the more suitable lord and are looking for additional FLAILSNAILS PC to join their causes.

Sven has been dubbed, by the great Skull Lord, 'Arch Doom Duke,' the second in command the of the Skull Lord's new, spiffy castle.

Samson Jones, on the other hand, is assumbling a "crack team" of "unhinged religious zealots" to fight said demonic legion. He is probably looking for allies as well.

Finally, Xawatlem has declared himself 'Wookie Pope' and is seeking legitimacy for his new title. In the mean time, he is using his resurrection spell to raise a order of "Born-Again Knights" as to thwart Samson for getting all the glory.

Mostly using this to upload the blessed Sir Antonio's coat of arms for the FLAILSNAILS Jousting Tournament. 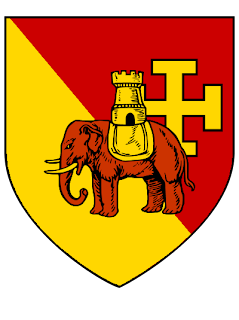 [Once again from the eyes of Samson Jones]

So, the mighty Samson Jones, leaving the smoldering remains of the corrupt officials who dared oppose him in Wessex, returns to fair Agrivaina.

Meeting up with an old associate from a previous expedition (Abador), who had managed to cure himself of his unfortunate mutagen based side effects. Samson Jones agreed to a consulting offer to guide Abador in proper techniques for an expedition to a portal leading to an area known as the "Vats of Mazarin".

Abador and a rather furry fellow appear to have journeyed through this location previously and had a fairly detailed understanding of the location. The path was through a steaming jungle, into a literally steaming cave that reeked of rotting meat.

The cave lead to a narrow stone bridge over a deep chasm, giant puslating cocoons hung from the ceiling and a glowing rune barred passage over the bridge. Samson Jones bravely began slaying the cocooned monsters as they lay in ambush, until a stray halfling that was following the party stumbled across the rune and activated some sort of magical trap. The giant cocoons sprung to life and monstrous spider mutated ogres (editors note: They were not ogres) began leaping towards the stone bridge. Using secret eastern fighting techniques Samson Jones was able to deflect most of the oncoming ogres into the bottomless chasm (editors note: Spasming wildly with a 10 foot pole, Samson knocked a few into the pit before Abador threw a flask of magic acid and his furry companion turned the surviving mutants to ash through holy incantations).

Moving quickly over the crumbling stone bridge they heard heavy chanting from behind a door, however those who had been here before spoke of vast riches and a terrifying monster to the north. Samson bravely chained the door shut until he could return later and headed north.

In an ornate temple to a pagan god, the whispered and hushed tones of these lesser men accompanying the might Samson Jones told of a horrid creature living in the well, composed of living water and guarding a vast wealth of ancient gold coins, living in the shadow of a statue to this accursed pagan deity.

Samson, a truly clever man, knew the solution. Bravely he poured an entire bottle of pure alcohol into the well and intoxicated the creature, then as it stumbled drunkenly after his compatriots, Samson bravely gained its attention by throwing a lit candle at it (editors note: No...just no). The beast lunged at Samson, who bravely held his ground, knowing it was bound within the room. As the creature lashed in impotent rage, inches from Samson, Samson struck it with a burning candle and ignited the alcohol infused within it.

Its viscous acid exploded in a ball of flame around the room and Samson let out a manly and violent roar of success before retiring and allowing the other adventurers to collect the coins. Any rumours of girlish screaming or being rendered unconscious are slanderous lies by jealous nobodies.

Returning to town for a quick pint or fourteen, it seems the local stray halfling that had been following the group was caught in an unfortunate accidental fire at an alchemists shop. Being a lovable well trained scamp, Samson buried him in a local pet cemetery and returned to his celebratory drinks! Luckily he found a new halfling and decided to convert him to St. Serpentor as a new mascot!

Everyone seems to love the new mascot, especially that owner of the curio shop. You know...something is really off about that curio shop and its owner...

From the Desk of Jamson Sones, who is in no way the same person as anyone listed in the above article.

How much railroading is necessary?

Here's a question. Are pure sandboxes satisfying? Is here is a world, there's some stuff going on enough? Or does there need to be something more? I think so. In the average campaign, there is the expectation that the character are adventures. In fact, the world is usually laid out with the assumption that the characters are adventures. Otherwise, why would the GM bother detailing adventure sites?

The question I'm considering is to what extend is setting up the world with certain expectations of the players railroading.

The GM has only so much time to invest in gaming, and thus has to prioritize what sorts of things to flesh out over others. Choosing to flesh out cities and societies will create a world a different feel and expectations than one in which the GM has decided to flesh out an enormous megadungeon (Vats of Mazarin) or a world that has multiple smaller dungeons spread throughout the country side (Agrivaina). Likewise, concentrating equally on on multiple aspects creates plethora more outcomes.

To some extent, the GM has to make some basic decision as to where the fun is. Yes, the GM can improvise and wing a game, a great satisfying game that has nothing to do with what has been previously fleshed out. But there is typically the expectation that the GM will let the players know where the fun can be found.

[To be clear, I'm not saying this is a problem. Not at all, it's just interesting to me. Many of the players in my home game desire more direction and a more epic feel than most G+ players, so I have to set up worlds and adventures differently.]

When setting up Agrivaina, I made the decision that the world would not push the characters in a particular direction, instead I created a list of adventurers are various type. There are 2 megadungeons. A few micro dungeons. Some wilderness situations. A seas adventure. And some intrigue. None have any particular consequences that will negatively effect the PCs if left untouched. However, I do have a limited number of hooks - a limited number of sites I can let the players know that there is fun there (e.i. the ones I've thought of). They can always create their own schemes, but I still feel I'm railroading them towards ideas I think are cool (as opposed to ideas I think are uncool).

My preferences still have a dramatic influence on the game's direction. I'm railroading the game in the direction of adventures I think are cool. If I don't think it's a detail interesting, I'll probably say something else - even when improvising and running off the cuff.

At the same time, I don't feel like I'm doing it wrong. Quite the opposite. Often times a blank slate is a dull slate. It's always more interesting to have a some ongoings in the world to riff off of.

I tend to have a different take on the paladin than most. Basically, I see the Paladin a temporary state of being. One is called to become a Paladin when the world warrants it, when a paladin is needed. They will all eventually fall (or die prematurely). The only question of your 17 Cha fighter is when is the time right for me to declarer my status as a paladin.

This interpretation comes from the Greyhawk supplement for OD&D. It reads


Charisma scores of 17 or greater by fighters indicate the possibility of paladin status IF THEY ARE LAWFUL from the commencement of play for that character. If such fighters elect to they can then become paladins, always doing lawful deeds, for any chaotic act will immediately revoke the status of paladin, and it can never be regained.

The point to pay attention to here is that a fighter need not declare himself a paladin at 1st level, but may elect to at any time. Only thereafter can committing a chaotic revoke his Paladin status.

I feel that the boundaries of the paladin class don't fit will with normal D&D play. Most players prefer to player rogues and scoundrels over knights in shining armor. The issue is that those two play styles tend to be mutually exclusive until one of the players cracks or caves. With unwillingness to commit a chaotic act, the paladin must either spend much of his time lording over other players or else fall from grace (or be incredibly unastute while theft and murder go on behind his back). While fun for a session or two, that type of play tend to get stale quite quickly.

However, it is no secret that having a paladin in the party can be an invaluable asset. With the power to heal via lay on hands, cure disease, and later on dispel evil at will. Those are big deal and alone can be fun in the short term. But are they worth suffocating another player's enjoyment over. No, not really.

Thus my interpretation of the temporary paladin came into being. That way a character who is already on the path to kill the evil overlord can take up the calling when he needs it most with the expectation of having to put it aside for good once roguish play returns.

[As told by Balan the Fighter]

The most important thing to remember is that the three of us accomplished our goal of retrieving a chest of fine glass lenses from a group of Italian Highwaymen and earning the reward for it's return.

Better not to dwell on how I, Balan the Fighter - bearded, mohawked and alternately eyepatched - caused a twenty foot fireball due to my poor understanding of combustible magickal liquids. While it was determined to be "Awesome", it was only my sturdy constitution which saved me from death. That and our stalwart Cleric to whom I am deeply indebted. Alas, our halfling friend was not so lucky and was burned alive. His body was fed to his spider-goat, according to his will.

Best not to mention how said halfling, prior to his death and for reasons still not clearly understood, managed to immolate his own henchman.

I would prefer not to talk about my second brush with death at the hands of a trio of stab-happy 0-level humans. It's a shame I'll not live down any time soon.

It should be mentioned that, through no fault of our own, a purple portal to a jungle is now open at the base of a lovely treehouse, immediately adjacent to a large barrel of delicious, life-giving whiskey. It is rumoured that on the other side lays one of the deadliest dungeons in all worlds. I simply cannot wait to step through and see what tries to kill me next.