The Extent of Charm Person

There has been some debate as of late conserving the 1st level Charm Person spell described in Men & Magic. Opinions range that the spell grants the use complete mind control of the subject to merely placing the charmed person in a position similar to that of a friendly henchman or retainer. What all these arguments seems to miss is a few passages hidden in Monsters & Treasure that give great insight into Charm Person's intent.

First, though, let's look at the spell itself:

Charm Person: This spell applies to all two-legged, generally mammalian figures near to or less than man-size, excluding all monsters in the "Undead" class but including Sprites, Pixies, Nixies, Kobolds, Goblins, Orcs, Hobgoblins, and Gnolls. If the spell is successful it will cause the charmed entity to come completely under the influence of the Magic-User until such time as the "charm" is dispelled (Dispel Magic). Range 12". (M&M, 23)

The key word, here, I see is "completely." Completely under the influence, the spell reads. While what exactly that influence entails is unexplained here, it is not partial in any way.

Let us now move on to the potion of human control in Monsters & Treasure:

The final bit of clarification comes from the ring of Mammal Control, which reads:

Mammal Control: The ring allows the wearer to control from 3-18 small mammals or from 1-8 large mammals. This does not consider any creatures listed on the Monster Reference Table. Control is complete, even to having the controlled mammals attack the others with it which are not controlled. Range is 6". (M&T, 33)

The question is, really, does the Charm Person spell work like the ring of mammal control, even to the extent of forcing the charmed person to attack its allies? Seeing as Human Control is (basically) the same affect as Charm Person, and Human Control should mimic the general guidelines of Mammal Control, I would say yes, based on my reading of the following passages.

But since others seem to have different opinions on the subject, what am I missing? 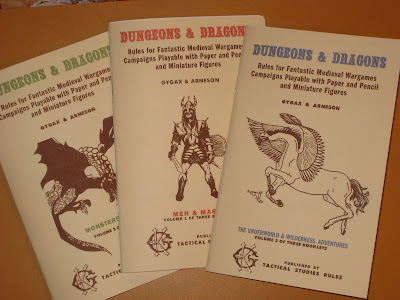 Having been accepted to the Peace Corps and shipping out in April, I realized that it might be good to have a set of these little, easily transportable books. Problem was, they're a bit on the pricey side to take to rural Bulgaria only to be ripped, soiled, and smudged, so I decide to print my own.

All that's left to do is figure out which two books I want to print with these extra sheets of cardstock. Right now, I'm leaning towards Eldritch Wizardry and Greyhawk, but might switch out Carcosa with G.H.'s thieves and paladins.

And, yes. My apartment really does have orange counter tops.

Last night, I finally got a chance to play Pendragon over G+ again. And while I could feel myself grasping for rules at times (it's been a while since I've played), I had a thoroughly enjoyable evening. The quest included a search for the Last Roman Census (which turned out to be from Caligula's Seashell Campaign) as a wedding gift for Robert, Earl of Salisbury's, daughter, Vivian. Other events included a joust with a lovesick night, making siege upon what was thought to be a minuscule fairy castle, and a rumble with a couple of King Mark's men, whose plot somehow concerns the Earl's lovely daughter.

What I enjoyed most was just how different all of the knights were. Sir Claudius, a Roman knight, sought to earn back the honor and reputation of his people; Sir Guy was a cowardly lady's man; Sir Malphile (sp?), the proud, reckless, and brutal; and Lady Saline, calm, courteous, a brilliant swordswomen, and how with a retinue of 12 men under her command for the next six months. Much of the two and a half hour game consisted of the knights bickering amongst themselves, giving me a chance to plot the next phase of the adventure.

One thing about Pendragon I've always had difficulties with is coming up with the initial adventure, which nearly always comes off as a little forced. While I tried for hours, scribbling notes over six pieces of white paper, to come up with something worthy of Malory, nothing really stuck. Instead, I wrote up a little mad-lib and had the players fill it in at the beginning of the night. While I didn't get a chance to use all that they came up with, it was just the inspiration I needed to sprinkle seeds for further adventure.

Playing so much D&D lately, there's a couple things about Pendragon I seemed to have forgotten, like just how competent beginning characters are with their swords, which made things a bit easier for them than I had initially expected. But that's easily correctable. The other is how difficult it is to run a good wilderness campaign and make things seems less than completely arbitrary. But now that I have some idea where the game is headed, I should be able to make amends rather quickly; that, and I need to refresh my knowledge of the rules a bit more.

We didn't get to the Winter Phase last night, you know that time where the Knights sit around in the castle, manning the Lord's walls, wooing the ladies of court while snowfalls make travel difficult and dangerous. It's actually my favorite aspect of Pendragon, and am excited to introduce it to the players. Since the Winter Phase   needs an entire post in and of itself, I'll leave you a song now sung by the Earl's minstrels concerning the events that transpired in the village of Windsor, written by Zzarchov, player of Sir Claudius.

The lady, the thinker and the noble Roman
The man in red and the lovelorn yeoman
As strong as the call of the heart may wax
its no match for duty; no substitute for an axe

The forest of faeries, their many warriors of blue
Cursed magic of shrinking; a tiny dungeon awaits for you
But even the high stone walls of their castle home
Cannot withstand the arm of a son of Rome.

The ancient scroll was found, dark warnings were told
But the scroll was requested, it's paper yellowed and old
The reckless Roman hand was fair no more from a deadly fire
But an ancient boon from ages past undid the injuries dire

Triumphant the questing four return with weary feet
Scroll in hand, Their lords test of cunning was complete
As the bride marched down the isle in the finest whites
The lands of Britain had four new and loyal knights.﻿