After six sessions, and the seventh coming up tomorrow, I though it might be a good idea to start fleshing out the world beyond the Vats of Mazarin. There are a few things I knew about the world from the starts. 1) the Lycenian Empire once conquored great stretched of land. 2) Perithian and the Vats were in the jungle near the boarder of the known world.

The world that I drew up turned out to be much larger than I had expected. Originally, I had conceived that Lycenia would be a month's journey to the North of the Vats. Now, not only is it about a month to the north, but two months to the East by sea over the Orinthian Ocean.

The are only two major settlements near the Lycenian colony. One is an overseas Viking settlement to the Northwest, currently unnamed, and the kingdom of Kenet to the to East. For the most part the land to the south is inhabited by scattered tribes, archeological teams, and would-be foreign princes, none of which have any real, lasting influence on the colonists besides the constant threat of invasion and the ability to trade native for foreign goods (typically steel weapons for various vanity items).

There is also a group of islands to the North East known as Telepthos, which are inhabited by pirates, natives, and enormous building-sized lizards.

As of now, here is the basic map I've created (click to enlarge): 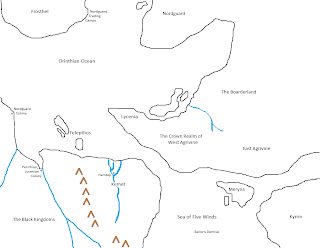 In the last few week's there's been two more delves into the Vats of Mazarin. This post would be quite lengthy if I went into as much detail as I usually do, so I'll try to keep it brief.

Zak was finally able to join in with his attack poodle for both sessions and we had another new player in sessions 6, Cole, who played a Chaotic clown. Otherwise Brother Hoyle, Squallia,and Abaddor returned both nights.

By the end of session 6, the party has found just about everything of interest in the first level of the dungeon as well as the Observatory sub level. While no characters died, all of the party's henchmen and hirelings were killed, bludgeoned to death by giant crystal statues, zombie by cursed wine jugs, ripped apart by a tentacled horror that was summoned from a lower level by the magic-users in the white robes, or killed as the result of a crazy old mole man's demented wish in a magical fountain. Some of them were pretty close to meeting their ends (Blicxa being forced to cut off his hand, which was bitten by the cursed zombie).

Speaking of the magic-users in white robes. The group discovered they are part of a rival school to Mazarin's and have taken over the dungeon (or are trying to) in the hopes of stealing his secrets.

The last important thing of note is that a mirror was discovered that could be used as a gate to, what the party believes is, the red planet, blistering red sands rolling around on the other side. They recovered the mirror and set it up in their room at the in for later inspection.

I've been at my parents house for a few days before term starts and have been pondering a Mutant Future games.

As much as I like many of the concepts the game brings, I feel like it's just too much for me at times. The main reason is that I'm not so into non-human characters. Not sure why, but I've never really liked them. Many because me players (and myself) tend to play them as humans with funny faces and different powers, not like inhuman aliens with complete different outlooks. Mutant humans, while I like the concept, I would for prefer mutation to be gained during play instead of during character creation.

For me, newly created characters are blank slates. They don't have interesting histories and backgrounds. Maybe a couple words or a short phrase on concept, but that's all I'm really interested in. Ideally, all of the character's personality, legacy, and defining characteristics should arise out of play. Before the game begins the characters were nobodies. Background can be added during the game to explain all of the oddities generated by die rolls.

I'm thinking now that a Bandits & Basilisks might just be exactly what I'm looking for. I'll give it a shot and let you know how it goes.