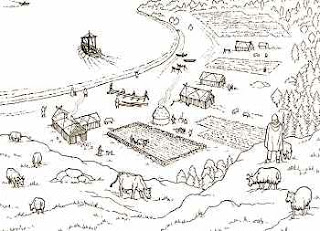 Over the last six month, my thought of running a viking age campaign have been growing. Stuck in the back of my skull, festering and awaiting the day to be let out and fully realized. That day has not come, but hopefully it is on its way. With the summer coming and a couple members of our group flying off for the holiday, I have been becoming more and more hopeful that an opportunity will present itself. My imagination yearns for raging tempests, bloody battles of northern barbarians clashing swords and axes with pious mainlanders, smoke from feasts after the return of a successful raid.

In my free moments over the last couple days, I've been researching choice bits of information regarding the viking age. Thus far, I've come across two key sources that are both expansive enough to provide enough data to base my endeavor on and are concise enough not to be overwhelming: BBC: The Ancient History of Vikings and Hurstwic, a loosely affiliated group based in New England with an interest in the societies and peoples who lived in Northern Europe during the Viking age.

This doesn't mean I'm going to try and make every detail historically accurate, just that I want to have some idea about what the 8th to 12th century Scandinavian world was like. This is a game not a History Channel special feature.

I've decided to start the campaign in a mid-size viking village ruled over by a young and fervorous king (I reserve the right to make up words on my own blog). The King is demanding taxes to fun a military campaign against the mainlanders with the intention to raid, conquer, and ultimately colonize. The village that the player character live in, however, does not have the funds to pay what the king demands. The village must figure out how to raise the demanded fund (raiding the mainland, making a deal with the dwarves to work their mines), face the wrath and might of the King (fortify the town and hope for the best), or make their way to the mainland and establish a village outside of the King's domain. The decision will ultimately be in the hands of the player characters with a few choice NPCs thrown in to play devil's advocate.

The situation above will only the beginning and will, hopefully, creating a starting point for exploration of a Midguardian sandbox adventure. What do you all think?