Palace of the Wind Sultan, Part 1 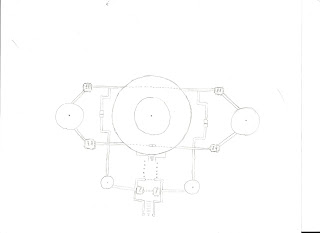 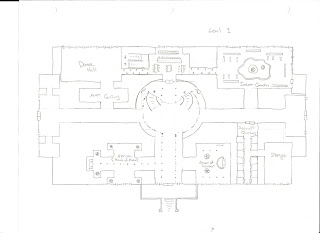 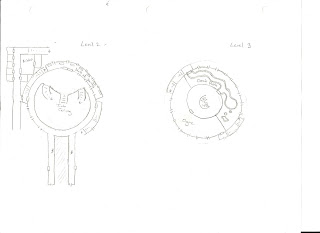 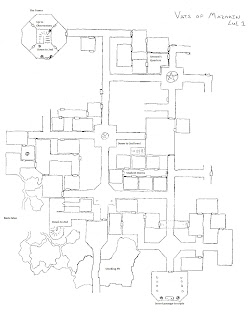 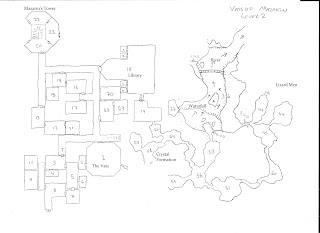 Level 4 - The Grottos of Zzassurine 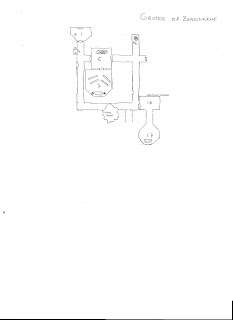 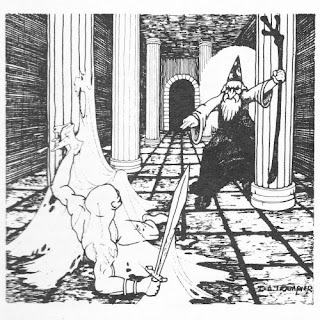 Probably the most useful of the bunch. This document crams all the essential information for AD&D spells in just a few pages. Contains detail on range, duration, casting time, spell components, etc. So far, I have:


Cleric spells - up to 4th level

Druid spells - up to 4th level

Magic-User spells - up to 4th level

Illusionist spells up to 2nd level

I always have trouble working out which spells magic-user characters can and cannot learn. It's a horrendous bookkeeping mess. However, I like the idea that not every magic-user will know sleep, charm person, etc. but will have some of the wonkier spells, like fool's gold and write.

To make the bookkeeping a bit easier, I went up and wrote up a sheet listing every magic-user spell in the player's handbook with a little box next to each spell. The idea is that if the box is checked, the spell is in the character's spell book. Cross off any unknowable spells. 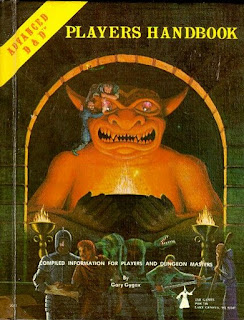 I wrote this up to give new players an overview of each of the AD&D classes. High level abilities aren't always included. In Segeo UI font, it fits cleanly on one page and is easily readable.

Note that the bard has been rewritten as a first level class. My games rarely make it that high, so I figured I would throw those players a bone and let them go for it right off the bat.

Bards, [ask for handout] (12 intelligence, 12 dexterity, 15 charisma) – Bards are wandering musicians and storytellers, combining combat, thievery, and magic. Bards can inspire allies and charm NPCs with their music, know a large number of languages, and have a knack for legends and lore, which may even allow them to identify certain magic items.

Cleric, pg 20 (9 wisdom; non-True Neutral alignment) - Clerics bear a certain resemblance to religious orders of knighthood of medieval times. They are skilled combatants but are forbidden by their religious codes from using edged and/or pointed weapons that shed blood. For their dedication, clerics are granted a number of protective/curative spells and the ability to turn away undead.

Druid, pg 20 (12 wisdom, 15 charisma; True Neutral alignment) – Druids are a sub-class of cleric that can be visualized as medieval cousins of what the ancient Celtic sect would have become had it survived the Roman conquest. While similar to the cleric’s, druid spells are more offensive in nature and attuned to the outdoors, but their spell casting ability power is spoiled by metal armor. They are limited to the club, dagger, dart, hammer, scimitar, sling, spear, and staff.

Fighter, pg 22 (9 strength, 7 constitution) – Fighters are the best all-around combatants, processing skill with many weapons and increasing quickly in level.

Paladin, pg 22 (12 strength, 9 intelligence, 13 wisdom, 9 constitution, 17 charisma; Lawful Good alignment) – A sub-class of fighter, paladins take on a strict code of conduct in exchange for the ability to detect evil at a distance of 60’, make all saving throws at +2, are immune to all forms of disease, may lay on hands to cure 2 hp per level each day, cure disease once per week per 5 experience levels, and emanate continuous protection from evil.

Ranger, pg 25 (13 strength, 13 intelligence, 14 wisdom, 14 constitution; any Good alignment) – Rangers are a sub-class of fighter adept at woodcraft and giant-slaying. Rangers add +1 per level to melee damage against “giant class” foes, surprise opponents 50% of the time in the wilderness and have only a 1 in 6 chance to be surprised themselves. Finally, rangers may track foes in outdoor and underground dungeon settings.

Magic-User, pg 25 (9 intelligence, 6 dexterity) – Magic-users draw upon arcane power in order to exercise powerful spells of an offensive, informational, and utilitarian nature, but are very week combatants, unable to use armor or any weapons besides the dagger, dart, or staff.

Illusionist, pg 26 (15 intelligence, 16 dexterity) – Illusionists are a sub-class of magic-user, favoring glamour and phantasm to flashy, offensive and utilitarian spells.

Assassin, pg 28 (12 strength, 11 intelligence, 12 dexterity; any Evil alignment) – Assassins are a sub-class of thief whose primary function is killing. With surprise, an assassin may attack on the assassination table, which gives a roughly 50% of immediately dispatching the victim. Furthermore assassins may use any weapon and are skilled in disguise, spying, and gain the use (at 3rd level) of all the thief’s special skills, albeit at a lower chance of success.

Monk, pg 30 (15 strength, 15 wisdom, 15 dexterity, 11 constitution; any Lawful alignment) – Monks are monastic ascetics and wandering eastern mystics. Monks may avoid missiles with a saving throw versus paralysis and gain increased unarmored AC, movement speed, armed/unarmed damage, and a decreased change of being surprised. Starting at 3rd level, monks also gain the use of the thief’s special skills and an odd conglomeration of seemingly unrelated special abilities of their own.

I've got a new game starting Monday. Mostly new players I've never gamed with but have know for a few years. I can't decide whether to use NGR or AD&D (light), but for now, I'm going to post some AD&D house rules and other resoureces I've written up over the years to make the game a little smother and less wonky.

No demi-humans, at least not without some persuading. Twelve classes and a plethora of spells and weapons should be more than enough to play around with. That and their extra abilities can b.e a bit overwhelming at first.

Roll hit points for first level. If the initial roll of the die (or dice for rangers and monks) is lower than the number given below, then the character is granted this number of hit points to begin his adventuring career:

Alignment is mostly of secondary concern. Just choose one that sounds OK to you, but don’t worry too much about it, unless you’re a paladin. Then you don’t get it so easy. Also, no masonic-like alignment languages. Note, however, that many magic items may only be used by characters of certain alignments.

Rangers are professional giant hunters, not Aragorn-protecting-civilization-from-the-wilderness types. As such they have no alignment restrictions or code of conduct and the bonus to damage vs. giant class foes may also be applied to missiles, but have only 1 HD at 1st level.

Magic-Users and Illusionists gain bonus spells as clerics, but with intelligence rather than wisdom as the governing stat. In exchange, all spell casters (including clerics and druids) may not prepare multiple copies of the same spell in a single payload.

A beginning Magic-User or Illusionist character will know four spells. One of these will automatically be read magic. The second is chosen by the player from the list in the player’s handbook. The final two will be randomly determined from the same list.

100 copper pieces = 10 silver pieces = 1 gold coin. It’s just easier to keep track of that way. Electrum coins are also common in ancient cashes found in ruins or other regions of the wild. Being a mix of silver and gold, two electrum pieces are equal to one gold coin.

Not all weapons and armor are created equal. Some are just better than others (longswords, flails, plate armor). These are assumed to be newer technologies, and, like all new technologies, will be surpassed in time. Ancient as they are, magic weapons and armor will be of earlier fashion – broad swords and rather than two-handed swords, battle axes instead of flails, glaives and spear instead of halberds, scale and leather instead of plate, and so on.

Armor versus weapon adjustments will be used only in when fighting human-type foes only, where armor can be accurately described by type. The to-hit adjustment will be based on the type of armor the opponent is wearing, not the opponent’s actual AC. So a character wearing leather +1 armor and wielding a shield, is considered to have AC 7 for the purposes of the armor versus weapon adjustment table, not AC 6.

No training and related costs are requires to gain new levels.

Experience will be awarded for acquiring treasure, slaying monsters, and exploration. Treasure is worth 1 XP for every GP value, including magic items. Monsters and treasure have a set XP value based on their hit dice or rarity, respectively. Experience will also be awarded to characters who participate in finding new places/causing major events, arbitrarily based on how difficult it would be for a group at 1st-level.

Treasure spent with accordance to the character’s roll will also award additional XP. Clerics, Paladins, and Monks donating money to their church/order or giving money to the poor; Fighters, Rangers, and Thieves spending money building up their reputation or carousing at the local tavern; Magic-User and Illusionists researching new spells or improving their library; Druids performing sacrifices to the Old Gods; Assassin spending gold on training or reconnaissance; etc. would all quality.

Potions and scrolls are the most common magic items available, and may even be purchased in specific cases from major temples and greedy magicians – although their stock and selection will generally be extremely limited, and it’s not a sure bet they’ll have anything at all useful.

Magic armors, weapons, and artifacts are rare. Such items exist in stories and legends, but they are not common and quite ancient, made in times long passed (so no magical plate mail or long swords). If you find such items, there is no guarantee a magic-user with the “Identify” spell will be available to tell you about it. Such items are best learned through investigation, questioning sages, seeking lost knowledge, and some trial and error.