Weaponry of the Viking World (Part 2) 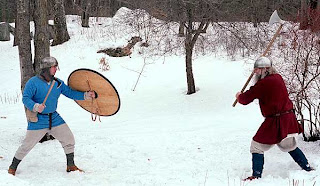 In just about any edition of D&D, there is a plethora of weapons to choose from. In the viking age, not so much. In this campaign, I'm planning on their being five standard weapons: spears, axes, swords, saxes (singe edged daggers), and bows. With that few choices, there is the opportunity to make each weapon unique.

For this game I will be using a pseudo Chainmail based combat system. All characters are given attack class (unarmed, light, medium, or heavy) and a armor class (unarmed, light, medium, or heavy) based on what arms and armor the character uses. For each piece of defensive equipment (helm, mail, or shield) a character employs, increase the character's armor class by one step. Therefore, a character wearing a helm and using a shield would have medium armor.

All weapons deal 1d6 points of damage per hit. The attack class of a weapon, depends on its size, speed, and ability to penetrate armor.

Bows: Light. 240ft range. May make one additional attack per round.

Sax: Light. Can be used even in extremely constricted location. Strikes last in the initial round of combat, but strikes first from then on.

Spear: Medium. Requires two hands. Strikes first in the initial round of combat, but strikes last from then on. 30ft range when thrown.