Armor of the Viking World

There were three main types, pieces rather, of armor during the viking age: the shield, the helm, and mail (chainmail). Of those three pieces, only shields were cheep enough to be of any widespread use. Helms and mail where extremely expensive and offered little protection compared to shields. If you could afford a helm or shirt of mail, you would have one, but only chieftains and war leaders were likely to such funds.

Shields: Shields where circular and nearly a meter in diameter. They were made of wooden boards and had a central hole for an iron hand-grip, which was riveted to the back of the boards. The fronts of shields where reinforced with leather and pained with family and village crests. In addition, to their defensive uses, shields could be employed aggressively to knock an opponent or his weapon off balance, making to easier to strike a telling blow. Axe blows had devastating effects on shields. 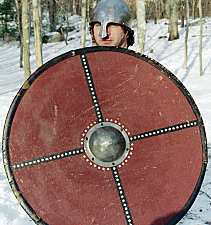 Mail: Mail was a protective iron fabric made up of thousands of interlocking iron rings. During the Viking age, mail usually was worn in the form of a mail shirt that went down, past the elbows and hung past the thigh. Padded garments, such as many layers of thin linen or randier hide, where always worn underneath a mail shirt to absorb the shock of a blow, since the mail itself only really prevented against slashing. Once again, I'd like to repeat that mail was exceptionally and limitingly expensive. Anyone who could have afforded one would certainly have wanted one, but probably few people could afford one. 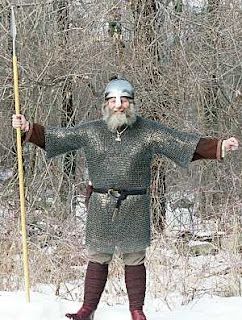 Helms: Helms where expensive to buy, difficult to craft, and provided protection only to the head. For that reason, helms where even more rare than shields or mail. However, very few broken or damaged helms have ever been discovered, meaning that the helmets worn during the viking age did a great job protecting the bearer's head. 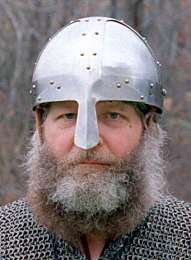 As I mentioned before, I will be using a pseudo Chainmail based combat system for this campaign. All characters are assigned an attack class (unarmed, light, medium, or heavy) and an armor class (unarmed, light, medium, or heavy) based on what arms and armor the character uses. For each piece of defensive equipment (helm, mail, or shield) a character employs, increase the character's armor class by one step. Therefore, a character wearing a helm and using a shield would have medium armor.