Weaponry of the Viking World (Part 1) 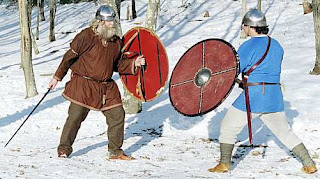 Laws of the late Viking period show that all free men were expected to own weapons, and magnates were expected to provide them for their men. The main offensive weapons were the spear, sword and battle-axe, although bows and arrows and other missiles were also used. Weapons were carried not just for battle, but also as symbols of their owners' status and wealth. They were therefore often finely decorated with inlays, twisted wire and other adornments in silver, copper and bronze.

Spears: The spear was most common weapon. Spears consisted of an iron blade on a wooden shaft, often of ash and 2 to 3m in length, used for both thrusting and throwing. The blades varied in shape from broad leaf shapes to long spikes. Skilled spearsmen are said to have been able to throw two spears at once using both hands, or even to catch a spear in flight and hurl it back with deadly effect. Compared to swords and axes, spears where most effective at piercing mail.

Axes: Scandinavian raiders did not wield gigantic, double-headed axes. No, viking axes were light, fast, and well balanced weapons with a cutting edge no larger than 6 inches (3-4 inches was most common). Depending on the length of the haft, axes where wielded either with a shield or with both hands, each style providing both offensive and defensive advantages. Compared to both swords and spears, axes were extremely effective at destroying enemy shields.

Swords: Swords were very costly to make, and a sign of high status. a typical sword was worth the price of 16 cows. The blades were usually double-edged and up to 90cm in length. They were worn in leather-bound wooden scabbards. Early blades were pattern-welded, a technique in which strips of wrought iron and mild steel were twisted and forged together, with the addition of a hardened edge. Thanks to their fully metal bodies, swords were stable, tough to damage, and easily reparable. It is for this fact that swords where often employed to cut through the hafts of spear and axes.

Most imformatino take directly from: BBC: Viking Weapons and Warfare

Email ThisBlogThis!Share to TwitterShare to FacebookShare to Pinterest
Labels: Vikings