Thoughts on Isle of the Unknown 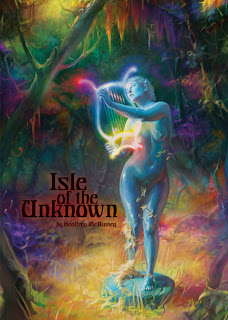 I went ahead and purchased a PDF copy of Geoffrey McKinney's Isle of the Unknown from LotFP, and, honestly, I'm very impressed. As I've mentioned to a few of you, I think this work is even better than Carcosa - and I'm a big fan of McKinney's previous work. For reference, The Isle of the Unknown is basically a crazy, wacky hex map filled with unique magic-users, statues, monsters, clerics, and magical locations. There are also a few towns thrown in for good measure, but those are mostly glossed over. Anyway, I'd like to get into some of the nitty gritty things, so onward with the review.

The Good
As stated in the introduction, Isle of the Unknown makes no attempt to deal with the more mundane aspects of the island. There are no wandering monster tables and any sort of common place locations/animals/whatever are either only briefly mentioned or completely ignored. Thus the Isle of the Unknown can be adapted to a number of thematic settings to suit your own campaign - although the defalt seems to float in the Mediterranean sea off the coast of France.

One of my favorite things that I didn't see  advertised is plethora of the real world references scattered throughout the text. For example, this is a lost dialogue of Plato's hidden away in a small monastery in Hex 1109. Likewise, a few of the NPCs are specifically mentioned to be Arabic or America. Most overtly, the majority of clerics in the isle are dressed in red tunics with a white cross, indicating a reference to the Knights Hospitaller of France. I feel this really give the Isle a sense of place and context within the wider world. That being said, I can see many of these references being edited out be most potential referees.

I also greatly enjoyed the lists of legends that accompany the hex descriptions. There are 30 legends (basically TSR style rumors) in all. 19 are clues to unlocking the secrets of some of the many statues and standing pools throughout the isle or give insights pertaining to the island's inhabitants. The final 11 are left up referee to determine the legitimacy of the legend; most of these deal with the island previous history and contents within the larger world.

I must say, however, that my favorite thing is how modular the Isle is. There isn't too much detail weighing down each of the hexes, to the point where of 10 different referee deiced to run the game for the exact same group of players, their campaigns would be completely different with only small slices of similarity. While some may see this as a fault of the product not be detailed enough, I see it as Isle of the Unknown's greatest virtue.

The Bad
While I greatly enjoyed Isle of the Unknown there are still a number of elements off-putting to me. One is that the unique monsters are not really unique monsters. Most are a smattering of different aspects from real world monsters are jamming them together into a slithering ferret or the like. While I got used to them after a while, the whole idea took some getting used to.

The other thing is that the statues just get a bit old after a while. To many of them for my taste either attack the party in some way as they approach or grant the gift of magical healing. I'm not really sure how this is would to work in actual play - maybe it works great - but the statues, at least from my reading, and a bit too repetitive.

Finally, I'd like to say that I was disappointed that a new list of PC spells did not make it into the game. I had previously heard that Geoffrey was going to include an entirely new set of magic-user spells to accompany the game so that the players did not feel left out compared to the treatment of NPCs and monsters within the setting. It's not a big deals, but the idea had enough potential that now I have to go out and do all that work myself...

The Reckoning
Overall, great product that I fully intent to use as the basis for an upcoming campaign. If that doesn't speak to myt love of Isle of the Unknown, I don't know what does.