Playing with Hexographer: A New Map and a Brief Key

I was playing around with Hexographer yesterday and created this new map. I'm pretty happy with how it turned out, so I'll go ahead and post it here. 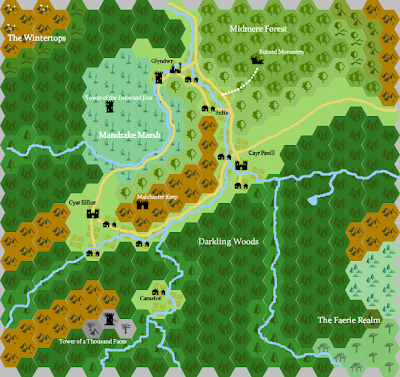 Cayr Pavill: A fortified castle and kingdom of 2,700.

Cayr Efflur: A small kingdom of 2,400 centralized in a fortified castle.

Camelot: A small forest village of 300, generally forgotten by the three major kingdoms.

Sulis: A farming village of 500, in constant contest between Glyndwr and Cayr Pavill.


Ruined Monastery: The ruins of a Monastery dedicated St. Gaxyg the Grey. (See FO! issue 1 for the adventure by James Maliszewski)

Tower of the Drowned Jinx: The ancient tower, once the estate of the suicidal queen of Mandragora.

Malchester Keep: Once part of the Kingdom of Efflur, no controlled by a band of ogres.

Tower of a Thousand Faces: A many faced tower located in the center of the deadlands.

Darking Wood: The eery forest separating the world of Men from the faerie realm.

Mardrake Marsh: Once the mighty kingdom of Mandragora, now writhing, goblin-infested swamp. (pretty much stoled from this blog)

Wintertops: The domain of a small kingdom of frost giants. (name stolen from the Dwimmermount campaign map)