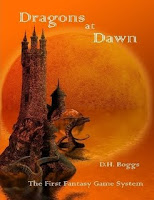 Remember Dragons at Dawn by Daniel H. Boggs? I know I do. For those of you that don't, Dragons at Dawn in an attempt to recreate Dave Arneson's "original, largely forgotten methods of play developed roughly in the period 1970-1973," and, in my opinion, its a fantastic piece of work.

Shortlty after the game's release, a little more than a year ago, the author announced that he was in the process of writing a supplement, titled Dragon's At Twilight. I've been looking into this for some time and am again considering starting a Dragons at Dawn campaign, but not much information has thus far been released.

Luckily, the release isn't too far away. How do I know? Because I've offered to edit it (free of charge, of course), a process I will hopefully be starting later tonight.

I'm not going to say too much more on the subject. Mr. Boggs is, of course, in charge of the project and any announcement will come through him (but I will likely post them here shortly thereafter).

The important point is that the wait is coming to a close. I can't wait.

Email ThisBlogThis!Share to TwitterShare to FacebookShare to Pinterest
Labels: Dragons at Dawn