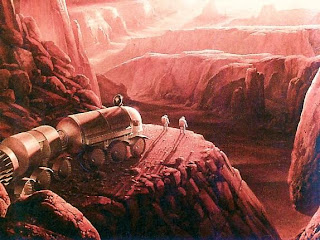 [I've finally figured out how to use labels in the new blogger set up. So you all should start seeing those starting to pop up again.]

Now that I'm running the Vats of Mazarin for ConstantCon, at least for the time being, I'm going to stop posting in-depth updates concerning its development. I'm perfectly fine with and would even encourage anyone whose read everything I've ever posted concerning my new megadungeon to play in the pick-up games, but at the same time I don't want to run out of cards in my hand.

Thus, I'm going to switch gears completely. To what, I'm not sure about.

Back in high school, I had an idea for a game where earth was becoming increasingly uninhabitable. Seeing Earth's distress, a group of benign aliens made contact with the most powerful nations on the planet and offered to solve all of their problems. However, the aliens were turned down by the terrestial governments, preferring for the planet to go on as it always had. Instead, the nations of Earth set up a new program to allow those wishing to leave the planet the training and means to do so with the mission of exploring, colonizing, and investigating another inhabited planet.

The colonists (players) would be give a list of 100 survey questions to complete with additional (and often more specialized) supplies sent for every 5 questions completed.

In my original brainstorming, I decided that it would be the job of one player to create the alien world for the colonists to explore. That, however, proved to be too large of a job and I abandoned the project.

Now, in my new, more enlightened state, I'm considering taking up the project again. This time, however, while the planet would be narrated by one player, the world itself would be created primarily via random tables and referee interpretation.

If I think of some clever way of making this game work, you'll hear more about. If not, maybe I'll revisit it again in 5 years.